MASV can let you send all your video content uncompressed. Here’s how to know when you should or shouldn’t.

Prefer to send your large files uncompressed? Learn how you can quickly send large, uncompressed files (up to 5TB in size).

Compressing video files can be incredibly useful when sending footage to partners, clients, or film festival print traffic coordinators. It helps get around the often-frustrating file size limitations of many file transfer and email platforms, and compressed videos also reduce bandwidth usage, upload and download times, and the amount of buffering required when streaming video.

But for all its positives, the unfortunate reality is that compression has a lot of downsides. First of all, it’s a pain: Who needs all those extra steps in their workflow when there are dozens of other things to do? But in most cases it also means removing data from your video file. Compressed video usually loses video quality, especially if your viewers use a large screen (that pixelated or grainy look that can come from compressed video on too large a screen is a type of compression artefact).

While this may not be a huge issue for weekend warriors transferring clips of their latest snowboarding session, it’s a potentially existential threat for filmmakers and post-production houses who live and die by their quality.

Below we’ll outline the pros and cons of video compression, along with some of the most popular techniques used by video professionals. We’ll also answer the question of whether you really need to compress your video files in the first place (especially when there’s a large file transfer service available such as MASV, with no data limits and automatic lossless compression).

But first, let’s take a step back and outline the nuts and bolts of video compression in general. How does video compression work?

At its simplest, video compression uses codec algorithms to automatically remove unnecessary or repetitive sounds or images from a large video file, thus making the files smaller. There are three main factors that go into determining the size of a video – resolution, bitrate, and encoding – and they can all play a role in helping reduce video file size:

There are other factors that help determine video file size including video length and frame rate (measured by frames per second, or FPS).

Videos living in the gigabyte neighborhood and above traditionally have been considered for compression before transferring due to the enormity of this content. Without compression, these massive video files would choke networks and simply not get delivered without the use of more robust networking technology (such as UDP solutions like IBM Aspera) or the logistically complicated-if-tried-and-true method of saving files on a hard drive and shipping it by courier. The UDP option is fast but expensive. Hard drives are slow, and you actually run the risk of losing your content in the mail.

Because it involves shrinking or scaling video, it’s crucial for filmmakers or post-production houses using manual compression software to think about where their video will most likely be consumed.

If primarily on YouTube, then a resolution around 1080p will likely be adequate (YouTube offers a guide to its recommended upload encoding settings here), but a video meant for larger screens or sharp, 4k-and-higher displays, should have a higher resolution. (Technically, as of Fall 2020, YouTube is supposed to be able to support massive, 8k video content.  We’re certain that November 2020’s YouTube outage is not because of MKBHD’s 8k uploads, as has been rumoured)

What are codecs and how do they compress video?

Codecs are the ubiquitous codes used by various file formats to compress video (or audio). Several types of video codecs exist including MPEG4, Quicktime, ProRes, or WMV. These codecs compress data automatically when a file is saved as a certain format or file container (such as AVI or MP4).

Most video codecs perform “lossy” compression in that they always throw out some data in order to compress the file and make it smaller – hence the video quality issues related to compression that we mentioned earlier. Next-generation video codecs such as HEVC (also known as H.265) have also gained popularity in recent years, offering more efficient data compression with far less impact on video quality. Even newer next-gen codecs include Versatile Video Coding (VVC), Essential Video Coding (EVC), and Low Complexity Enhancement Video Coding (LCEVC), along with Google’s VP9 and the open-source AV1.

Most next-gen codecs such as HEVC are classified as “lossless” compression, in that they don’t lose any data and keep the same video quality after compressing (although there is mild debate about that in some quarters).

How To Compress a Video?

Two relatively easy ways to compress a large video file are to either make the video shorter by trimming footage, or to remove the audio completely (which probably isn’t a realistic option for most projects). Barring those methods, here are a few other ways to compress video files using either desktop or web software.

Method 1: How to Compress video via VLC

Method 2: How to Compress video via Shotcut

Method 3: How to Compress video via QuickTime

Other video compression services include VideoSmaller, Clipchamp, and HandBrake. Additionally, InVideo summarizes a few ways to compress videos on their blog. They all do the job reasonably well, but also suffer from the same drawback: They add several (often needless) steps to the workflow of video professionals, who in most cases have enough on their plates without having to compress video files before sharing.

The downside of compressing video files

The addition of several steps is just one downside of having to compress video files. As we mentioned earlier, most codecs perform lossy compression, so you’ll almost inevitably lose some audio and video quality. In some cases this may be imperceptible, but it can be problematic in other scenarios, such as the color correction phase of post-production when minutely small visual details are vital (and can be lost forever after being compressed).

There’s also additional processing time required, especially for higher-quality codecs such as HEVC (which has been described as having “glacially slow encoding times”). File errors can crop up during the compression process. And your recipients may also not even be able to open your compressed file immediately if they don’t have the right software. Determining how to compress video properly and efficiently is a fine balance.

So here’s the straight dope on compression: if your video quality matters, don’t do it. Video pros who need to send content at maximum resolution or in RAW will find that MASV can deliver terabytes of data (including individual files up to 5TB in size) from the browser or the insanely fast and reliable MASV app. MASV is built on a network of 191 nodes worldwide, meaning regardless of whether you used to bicycle a hard drive around the corner, or empty your wallet on UDP to send files across the world, MASV can deliver your files with maximum reliability.

MASV’s winning combination of unlimited portals, unlimited teammates, and no limits to the volume of data users can send or receive means video professionals and other creatives don’t need to spend time manually compressing files anymore. All files sent through MASV are automatically zipped and received in the same quality they were sent – eliminating all those annoying steps we talked about earlier! And with all files encrypted at rest and in flight, you get the added benefit of massive security as well.

There are other benefits to sending large files by MASV: in both the browser and the app, MASV maintains your original file structure, so recipients don’t need to spend valuable time trying to make sense of the files you’ve transferred. It automatically recovers from lost internet connections so you don’t have to sit around babysitting your transfers. Its browser-based interface makes sending a massive video file as simple as sending an email, and if a transferred file sent through our global network of servers somehow doesn’t arrive on time and it’s our fault, we’ll refund your money. Using our app is even better; saving you swap space and time from unzipping files upon receipt.

It’s for these reasons MASV is tailor made for film festivals, who typically receive thousands of submissions in various file formats from all over the world.

It’s free to get started. Our free trial gives you 100GB of data so you can test our speed and see the MASV difference for yourself. Once you sign on, you’ll pay just $0.25/GB and can send as much or as little data as you need to.

So on your next project, instead of adding needless compression steps to your workflow – and then having to spend time watching over your large file transfers in case there’s a problem – just use MASV. We think you’ll be glad you did. Get 100GB now–it’s free!!

Integrations To Help You Streamline Your File Transfer Workflow. 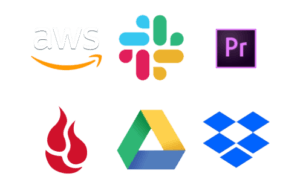 360 video is a recording that include views from every direction, all shot at the same time, using a rig of multiple cameras or an omnidirectional camera.

Why strong file encryption is a prerequisite for secure file transferFor creative industries, data breaches of intellectual property (IP) are a...
Read More

When we think of sending large files, we often think of video content or even large datasets weighing hundreds of GBs. But audio files—especially in...
Read More

Have you ever tried to send or receive large files from your browser window? For example, downloading a ZIP file with video assets from Google...
Read More

What are the easiest ways to compress video files?

Two easy ways to compress a large video file are to either make the video shorter by trimming footage or to remove the audio completely. If neither of those options is preferable, there are several ways to compress video files using software like VLC, Shotcut, or QuickTime.

How to Compress video via VLC?

To compress a video via VLC, follow these steps. Click "Media" then "Convert/Save", then click "Add" to select your video file(s). Next, click "Convert/Save" to bring up a list of conversion options. You can select your preferred type in the profile dropdown. Now select your conversion option. If you still need to reduce your file size, you can lower the video resolution by going to settings then resolution. Once you’re satisfied with your selections, simply hit "Save", select your destination location (on your hard drive or cloud storage), and then click "Start".